I'm enjoying a vacation at the moment. I decided to visit a friend in Los Angeles. I have been here once some years ago, but wanted to check it out again.

The flight here was so long. Yes, I knew that in theory, but experiencing it was another thing entirely. From Lagos to London was okay. That's a fairly short flight (6 hours) and it was night-time, so I slept.

From London to LA was 10 hours. The in-flight entertainment was not working for the first two hours or so. It took me a while to realise when it started working, because the crew member who was working on it (Tim) had made several announcements about it already, re: how he was working on it, what he was planning on doing next, etc. At a point he said in an anguished voice, "I am sure that you are so tired of hearing my voice by now. I will just keep working on it and when it starts to work, you should see it on your screens."

Ten hours in a plane is no mean feat and I kind of under-estimated just how long that journey is. Plus, how disorientating. After traveling for about 24 hours (including time from my house to the airport in Lagos, wait and flight times and finally to my friend's house in LA), it was only about 3PM on Sunday (in Pacific time). I called home and it was Monday already. I have been pretty tired - more than I thought I would be after all I am no traveling novice. It's 4:34AM (Tuesday) here and I am wide-awake. I can see that if I don't force myself to sleep and wake-up at regular times, I could be recovering all week from the flight and time difference (then of course, about the same time I fly back to my familiar time-zone and will have to re-adjust).
Posted by Ore at 12:26 pm 9 comments:

Email ThisBlogThis!Share to TwitterShare to FacebookShare to Pinterest
Labels: Travel

Jill Scott is Back 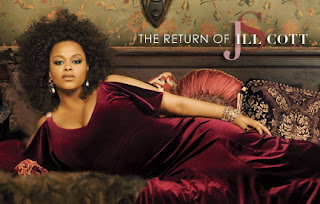 Jill Scott is releasing a new album at the end of next month. Apparently she released one earlier this year - Collaborations. My God! Where have I been that I didn't hear about it? I'm such a big Jill Scott fan and at a point in time I would have made sure that I had the album as soon as it came out. Well, I guess things change and priorities along with them.

Jill's on the cover of the September issue of Essence. Her hair is different. Apparently she has it for a Tyler Perry film she's shooting. Although she looks beautiful as usual, I'm not crazy about the style. Writer, Terry McMillan, who interviews Jill for the magazine states bluntly that she doesn't like it either. I was surprised to read that. It doesn't go with the normal fawning over the celebrities that we see in Essence interviews (having said that, the rest of the interview is par to the course).
Posted by Ore at 1:20 am 3 comments:

There have been many links posted on many blogs to speeches from last June's TED (Technology, Entertainment and Design) Global Conference held in Arusha, Tanzania. I was sent this link a few week by Natasha Dantzig, one of the conference staff.

It features Patrick Awuah, co-founder of Ashesi University, small liberal arts college whose mission is to educate leaders of integrity and competence for Africa.

Awuah moved back to Ghana after living in the US for about 10 years to set-up the university. In the video, he talks about his belief that leadership is a major problem in Africa and how today's young people are trained will make all the difference in the continent's future. Ashesi University sets out to do that, offering "a liberal arts education, steeped in critical thinking, idealism, and public service, which is the only way to produce quick-thinking, ethical adults" (from Awuah's bio).

Aside from a focus on ethics and leadership, in the video, Awuah touches on the uncritical mindeset brought about by the rote-learning style of education common on the continent. Having spent time with a group of very intelligent secondary school students and seeing how rote-learning stifles creativity, I feel very strongly about incorporating methods that stimulate critical thinking.
Posted by Ore at 12:47 am 1 comment:

The Travails of Banking

I had to go to the bank today to withdraw some money. Now I really hate going to the bank. Perhaps "hate" is a strong word to describe my feelings. Maybe "detest intensely" might work better.

Alright, so I intensely detest having to go to the bank for anything. When I first moved back home, my first choice of bank to open an account with was GTB. However, as I considered the lack of parking spaces in most of the GTB branches on the island, I decided to look around for a bank that had ample parking spaces. I would not recommend using this as a criteria for selecting a bank, by the way, but it worked for me back then. Or so I thought.

I chose Standard Trust, which was near my home and had a lovely wide open space in front of its premises. It also had very few customers (either a very bad sign or an indication that the staff were deathly efficient), a fact attested to by the near-empty banking hall. Great! A bank where I won't have to hover around looking for somewhere to park and where I will be attended to quickly. What more could one ask for in a bank?

Well, unfortunately for me, Standard Trust became subsumed into United Bank for Africa (UBA), a behemoth of a bank that lumbers along in much the same fashion that you would expect of such a big (and old) organisation. Efficiency does not appear to be a watchword of the bank with simple processes taking forever (I just received my e-banking log-on details after first signing-up for it a year ago).

I've since opened an account with a much newer and efficient bank, but still retain my UBA account. So I still have cause to go to UBA from time to time - albeit as infrequently as I can manage it. So I got there this morning at 8AM so that I could do my business as quickly as possible and leave. I met some fellow customers waiting for the opening of the iron grill. Minutes passed but yet we continued to wait. More customers arrived and hissed loudly on seeing the still shut bank. Some more came and decided to wait outside in the early morning sunshine or in their cars.

"Ah, but it's past 8 now!" one woman exclaimed in dismay.

FINALLY, the UBA staff deigned to open their doors. We heard the keys jingling in the lock and the grill was pulled up. As we trooped in, one of the customers muttered "This is the WRONG bank!". At times like this, I could not agree more. When I asked one of the ladies behind the counter why it took so long for the bank to open, she just smiled in that coy way that people will do when they have absolutely no excuses. I told her that the street was filled with banks and we could just as easily go off to one of their competitors.

"We are very sorry. We will attend to you shortly. We are just getting the money." She gestured to a corner table from where the cashiers fork-lifting arm-loads of tightly-bound wads of cash.

And would you believe that after all that, as another cashier attended to me he looked up at me and apologised that my withdrawal was taking a little while. "Our system is slow."

Lord have mercy! This is truly the WRONG bank.
Posted by Ore at 9:18 am 5 comments:

Email ThisBlogThis!Share to TwitterShare to FacebookShare to Pinterest
Labels: Banking

When the Light is Here to Stay

Being away for the summer camp (and largely away from TV, radio, newspapers and the Internet) over the last week put me in relative isolation from what's been going on. My feeling of coming out of some kind of seclusion was heightened with the realisation that PHCN/NEPA really seems intent on improving its performance.

Over the last 2 or 3 weeks, we've had electricity most of the time. Whereas the old pattern was for PHCN to give us up to 15 minutes of light a day maybe twice a day, with the rest of the day spent in pre-historic like conditions. Now, we have light almost all day. I am so used to returning home from work to no light that it can be slightly unnerving to always have light. Where giving the gateman the key to get diesel to fill-up the generator was a daily occurence, I cannot remember the last time he reminded me that the generator needed diesel.

I discussed it briefly with my mum and she was equally as perturbed. We both wondered if all was well at NEPA.

Don't misunderstand me and think that I am actually complaining about the current state of things. No, no! It's just that when you have been used to coping with certain situations, you need to re-adjust when the situation changes. I just hope that very soon we will not have to return to the dark old days.
Posted by Ore at 8:15 pm 3 comments:

Email ThisBlogThis!Share to TwitterShare to FacebookShare to Pinterest
Labels: PHCN

It's been such a long time! I hate it that a lot of my recent posts have started off that way. Well, so there are some valid reasons.

My company organised a careers retreat for senior secondary school students last week. For 1 week, I slept in dorms like I was in school again. Okay, I was never actually a boarder when I was in secondary school and this was a pretty nice school by most standards. The boys and girls' common rooms had air-conditioners and a TV with DVD players for the students. The dormitories and dining rooms also had ACs, so we were living quite well.

I don't often get to spend time with young people of the SS1 - 3 age, so it was an interesting refresher of how things were back in the day. At night, I'd be kept up late by the never-ending chattering of the girls. They talked about school, school-work, clothes, parents and boys (well, perhaps that is somewhat similar to what a lot of grown women I know talk about).

In the morning, it was quite hard work to herd the girls to morning exercises. While the girls would struggle to get up at 7 am and eventually schlep out of the school grounds for a run/walk, the boys would have been up apparently since 6 playing football.

The students represented some of the smartest science students in the state and it was very awe-inspiring to be around them. They were outspoken and ferociously intelligent and asked extremely incisive questions of the speakers who came to talk to them about careers. Although I am, in some cases, (ahem) almost twice their age I felt in some ways quite humbled by them. I wish I hard worked harder at school and had more confidence in my abilities. I loved how they viewed life as an open book, with so many pages yet to be written on - in short, filled with unlimited possibilities and a lifetime of adventures. I frequently have to remind myself to look at my life in the same way.
Posted by Ore at 4:58 pm 2 comments: