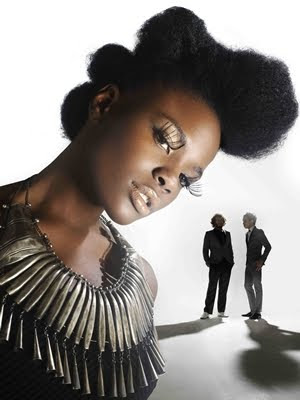 The braids are coming out after a grand total of 3 weeks. Normally I have them in for as long as I can get away with, but for some reason, I'm itching to get this load off my head. Maybe it's the heat or perhaps I've braided my hair one too many times this year.

Anyway, thankfully I am not fussing about what my next style will be or what my 'Christmas hair' will look like. With more knowledge and fellow naturals whose hair I can admire, this year has seen me explore more options. At the same time, I think I've developed a signature style, which is different from my signature dos in the years past.

This change in style has in part been due to the singer Shingai Shoniwa. She has gotten a lot of attention on some hair blogs this year, but I first saw her earlier this year when the group she's a part of - The Noisettes - had a single Don't Upset the Rhythm playing everywhere in the U.K. Her hair is a similar texture to mine and she wears it long, though from some photos I've seen that she's not averse to incorporating extensions in some of her looks.

I paid particular attention because of her natural hair and the way she wears it, which is in a very laissez faire, casual way. The less-schooled would be tempted to think she rolled out of bed and forgot to do her hair, but I know better. The earthiness of her pompadours and puffs belies the careful sculpting and pinning that must have taken place. 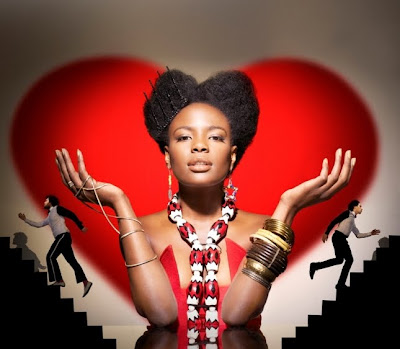 Introduced to this new option, I've made best friends of my bobby pins, clips and bands to twist, mould and secure my hair into new and interesting styles. These rarely take more than 15 minutes. I'm happy and I think my hair's happy too.
Posted by Ore at 11:03 pm 2 comments:

A Tug of War

I have been reading about Jane Fonda and the end of her marriage to Ted Turner. At the time, it was widely alleged that the cause of the break-up was her newly-found faith (she became a born-again Christian in 2001; he has been reported to be anti-religion). Both she and Ted Turner have since said that the main problem was a lack of communication and not religion. He said he was upset that she didn't talk to him about it, while she has claimed that she feared that he would talk her out of it if she had.

I understand what it's like to have faith so young and fragile that you worry that the slightest attack will completely snuff it out. So you try to protect it and stay away from negative influences as much as possible.

However, Ted and Jane would not be the first couple with almost diametrically opposing perspectives (in 1 or more areas) who have successfully lived together (or at least appeared to do so), so what makes the difference? Is it having shared values that transcend a particular faith? Openness and communication? Flexibility? Plenty of humour? Or something else? I suspect that it probably comes down to a mixture of the above.

My musings are not just in reference to faith; it could relate to attitudes to life (e.g. Adventurous & Risk-Taker vs. Fearful & Cautious); political views (e.g. Liberal vs. Conservative); values (e.g. Feminist vs. Patriarchal).

And this brings me to the next point: where do you place the person who has views that would ordinarily be considered conflicting? For instance, being a Christian and a feminist? At a conference last year, I was reminded that as feminists we need to embrace all women into the movement irrespective of individual situations, abilities and sexual orientations. As a Christian, certainly not all things are acceptable. I've always been a big proponent of safe sex for people who are sexually-active and not married. As a Christian, pre-marital sex is a definite no-no. I have always felt strongly that a couple should be equal partners in their relationship. However, while men and women have equal standing in God's kingdom, within the family unit, the man is the designated head. So, this leads to another set of internal wranglings and I suspect these will go on for me for a while.

As a naturally introspective person, I am constantly analysing and questioning. I believe it was Socrates who declared that the "unexamined life is not worth living", and while I agree that digging below the surface is important to do, it is also very tiring.

So what to do? Live a life governed by one set of rules so that there will be no contradictions in any of your views? Be or partner only with people who share all your fundamental values, so there is no push and pull? So many more questions added to my already full head......

By the way, I am always interested in finding out about women who are both Christian and Feminist, so I'm pleased to see that Jane Fonda has a blog. I'm going to check it out, though from a cursory review it looks like she she's more comfortable sharing about her activism and professional life than her faith.
Posted by Ore at 11:35 am 5 comments:

There has to be a better way! I'm writing a funding proposal and have been trying to write this proposal for the last month. I don't think I have it in me anymore to spend days on what will turn out to be yet another unsuccessful proposal. I have decided that next year, I will turn to more innovative ways of raising money for the nonprofit organisation, which I run.

There will be less time chained to my desk slaving away on yet another proposal! There will be more out-of-the-box thinking on how to generate revenue! There has to be a better way!
Posted by Ore at 3:16 pm 6 comments:

Friday, November 13 will feature events such as Mentoring Kids by Eugenia Abu at 11 am, followed by Children Craft Workshops, Play Groups and Performances. The final stage of the Book Trek: the Quest for the Most Literate Student holds at 2pm and will involve the review and the discussion of various books.

Saturday, November 14 will kickoff with Conversation: Lagos in the Imagination (3) with extensive references to Isi Joy Bewaji’s Eko Dialogue, Tejo Cole’s One Day is For The Thief, Odia Ofeimun’s Lagos of the Poets and Sefi Atta’s Swallow. There will be a Publishers Roundtable: Why I Publish What I Publish from 2pm to 4pm. Festival Party celebrating Segun Sofowote@70, Frank Okonta@70, Sammy Olagbaju@70, Tunji Oyelana@70, Mahmoud Ali Balogun@50, Nobert Young@50, Afolabi Adesanya@50, George Uffot@50, Edmund Enaibe@50, Kunle Adeyemi@50 will start at 5pm with music by Fatai Rolling Dollar.

Sunday, November 15 will open with a Youth Conference: Creativity and Empowerment, featuring a panel of young creative artists and art managers; convened by Positive Development Foundation and Youth Bank. Art Stampede will come up at 1pm.

Check the CORA blog for more information.
Posted by Ore at 1:23 pm No comments:

I am here at thr workshop organised by POLDEC on the use of mobile phones in advocacy.

Windows Live Hotmail: Your friends can get your Facebook updates, right from Hotmail®.
Posted by Ore at 2:02 pm No comments:

Test post from phone
Sent from my BlackBerry wireless device from MTN
Posted by Ore at 3:01 pm No comments:

A Single Girl's Guide to Dating

This is hilarious. When you think there's been no progress made in gender relations, things like this make you realise that it used to be so much worse. But depending on where you are, some of these rules are still very much in effect.

"A lady should know how to behave on a date...and we've got you covered: follow these 13 steps from the February 1938 issue of Click Photo-Parade magazine and you'll have men falling all over you." 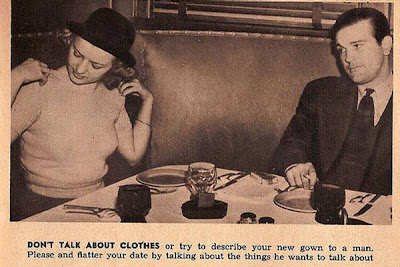 Cassava Republic Press is pleased to announce a new voice in Nigerian literature: Sarah Ladipo Manyika and her debut novel In Dependence. Sarah, a resident of California, is visiting Nigeria this November to promote her book, which will be available nationwide from December. Sarah spent much of her childhood in Jos, Plateau State, but has lived in Kenya, France, and England. She currently teaches literature at San Francisco State University.

There will be two book readings in Lagos and Abuja.