Voice of America is a collection of short stories exploring themes like loneliness, anger, destitution, longing, frustration and displacement. It examines the struggles of immigrants as they realise America is not what they imagined.

E.C Osondu won the 2009 Caine Prize for his short story ‘Waiting’. Voice of America is his debut collection of short stories.

This event is hosted by:

What a day!!!! That's been my constant refrain today.

I woke-up by 6am to get ready for church. That it was raining already was no surprise, afterall it is the rainy season and the last 3 Sundays mornings have seen some fairly heavy rainfall. So how was I to know that today would be different?

Perhaps the first signs were when the rainfall did not relent at anytime during the service. After the first service, I stayed for about an hour and a half of the second service. The plan was to leave when the rain petered out. When my sister and I saw that wasn't happening, we left anyway and got a good soaking in the 10 minutes it took us to walk to the car.

On our way, we encountered a car that had broken down in the middle of the already narrow road. The guy had obviously called a friend to pick him up. As we waited behind his car, he opened the door of his car and clambered into the waiting SUV and without even bothering to lock his door (afterall who's going to bother stealing the car?) they drove off. It was quite funny.

The roads around my church and home were flooded as was expected, but the water levels seemed to be higher than normal.

So despite all this, why did I think it would be a good idea to go to the cinema? LOL!! Well, in my defence I did assume that the rain would stop eventually.

So I made my way there with my aunt. We went in and saw our film - The Adjustment Bureau with Matt Damon and Emily Blunt, which is a good film BTW. When we came out of the Galleria, incredibly it was still raining. For the first time today I was actually stunned.

The guard at the entrance informed us matter-of-factly that we could not leave as the roads were flooded and cars were breaking down left right and center. Either that, or they were falling into gutters.

So what to do? I went back upstairs to the cinema floor to survey the extent of the flooding. And that's when I saw this: 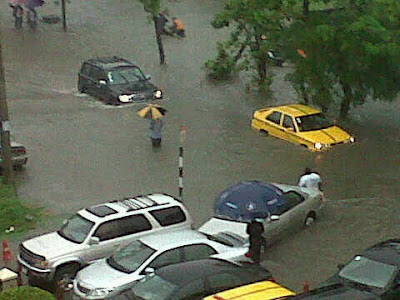 The small cars were almost swimming along on the road with water up to their windows in many cases. 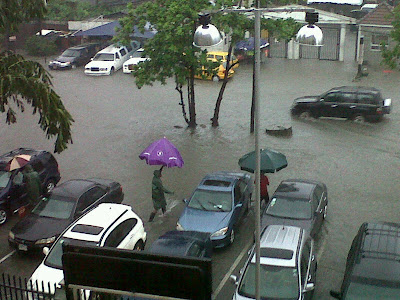 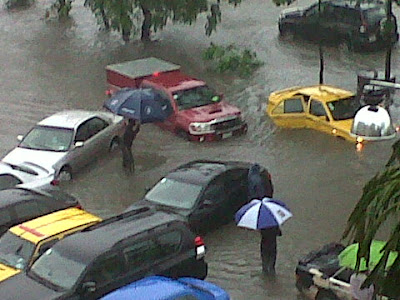 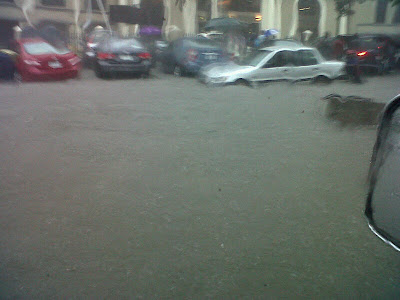 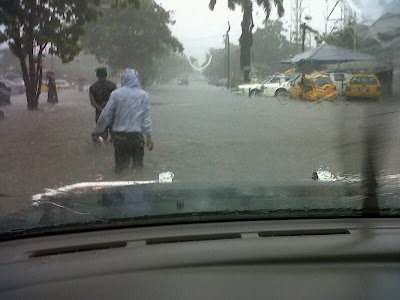 Today's weather was for big cars. On a normal day, I complain about the size of my car, but today I really thanked God for it. Although, even with my height from the ground, my heart was sometimes in my mouth. 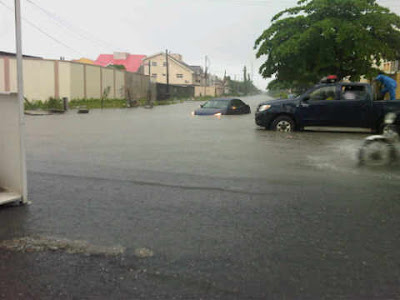 Lekki Phase 1 (Taken by a friend)

Well, after some deliberation, we left afterall who knew when the rain would stop and driving conditions would only get worse when it got dark. This turned out to be a wise decision, as the rain did not stop for the rest of the day.

And this was in my corner of the Lekki-V/I axis. I've been hearing and reading horrible accounts from all over the state.

I just read that Monday has been declared a public holiday for all public and private schools in Lagos, so that clean-up can be done on the roads. What type of clean-up can be done though? I'm not an expert on the environment, but I believe that this flooding problem is due to a number of factors, including Lagos being below water level, a poor state-wide drainage system and climate changes. I'm also sure that all the sand-filling that has taken place especially along the Lagos lagoon to create space to build fancy new hotels, which has probably pushed water levels up hasn't helped either.
Posted by Ore at 10:29 am 7 comments: