Reading On: The Years

Started Virginia Woolf's The Years a few days ago. I'm not quite on 1-book-a-day. Must cram in all other sorts of fun activity and sleep in my break afterall.
Posted by Ore at 9:50 am No comments: 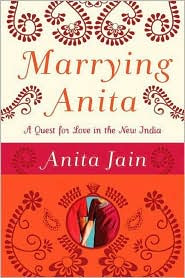 Aaaah, it's good to be on holiday and to be under no compulsion to get-up early or to work - though strangely enough, I find myself doing both anyway.

I just finished the first book of my vacation, Marrying Anita by Anita Jain. Many years ago after visiting India, I developed a strong interest in Indian literature and read everything I came across. It's been a while since I read anything by an author from the sub-continent.

The title of Jain's book is chicklit-ish, but I decided to buy it anyway, intrigued in reading about her perspective and experiences on finding the right partner. Well, it was certainly an interesting and easy read, as Ms. Jain is a good writer with a wry sense of humour. However, is she serious about finding a husband? No, I don't think so! It was painful and increasingly tiresome to read about her drinking, getting stoned and her sexual escapades. Never have I seen such shooting ones' self in the foot.

All the classic signs of not really wanting a relationship are here: sabotaging promising relationships; lusting after unavailable men; behaving inappropriately while on dates (e.g drinking herself blind).

I don't expect to like the characters in the books I'm reading. In fact it's usually more interesting (though often torturous) when I don't. However, it's more painful when I know that someone actually behaved in this way/said these things that are making me cringe in shame.

Okay, bring on the next book.
Posted by Ore at 8:13 pm No comments:

This student-led event provides an opportunity to gain insights into a typical day in the life of a Ross MBA student as well as to ask questions about the curriculum, MAP, the Ross Leadership Initiative, student activities, and career development while meeting and mingling with members of the greater Ross community

The Ross MBA is currently #5 position in Business Week MBA rankings and continues to provide leadership in thought and action.

Teju Cole and Toni talk books and Lagos - this crazy city that we all love to hate.

Teju Cole is a writer and photographer currently based in Brooklyn. His writing has appeared in various journals in Nigeria and the US. Every Day is for the Thief is his first novel. 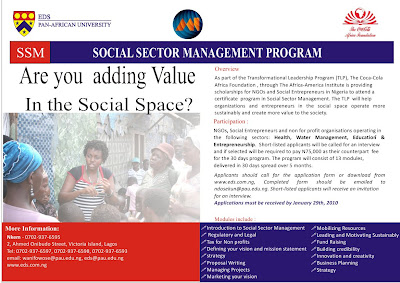 As part of the Transformational Leadership Program (TLP), The Coca-Cola
Foundation, through the Africa-America Institute is providing scholarships for NGOs and Entrepreneurs in Nigeria to attend a certificate program in Social Sector Management. The TLP will help organizations and entrepreneurs in the social space operate more sustainably and create more value to the society.

This is open for NGOs and entrepreneurs operating in the following sectors: Health,
Water Management, Education & Entrepreneurship.

Click on the flier to enlarge or visit eds.com.ng for more information. The deadline is January 29, 2010.
Posted by Ore at 3:40 pm No comments:

Job Description:
From January to April 2010, each regional researcher is expected to produce four case studies over 12 weeks and facilitate a total of two online discussions - blog posts - over 4 weeks. Each regional researcher will be paid $800 per month for a total of $2,400. We also have some money in our budget to bring the most active researchers to the 2010 Global Voices summit in order to present their findings on a panel.

In addition to the regional researchers, we are also able to offer a small honorarium ($200) to eight reviewers who leave comments that evaluate the case studies and blog posts published by the researchers.

Examples of such projects include www.mzalendo.com which makes information more accessible from the proceedings of the Kenya's parliament; www.congressoaberto.com.br, which uses official data published by government agencies to encourage the public to engage more closely with the Brazilian legislature; and ishki.com/ which aims to involve citizens from the Middle East in developing solutions to civic problems. We want to know what other projects exist, what challenges they are encountering, and what can be done to better support their work.

If you are interested in working on this project as a regional researcher or as a reviewer please let me know as soon as possible. If you know of someone who is the perfect fit for this project please put me in touch with him/her. If you are interested in the regional researcher position please respond (off list) with answers to these questions: 1) What is your experience and interest in the field of transparency, accountability, and civic engagement? 2) Why do you want to be involved in this project?

Call for Concept Notes: Radio, Convergence and Development in Africa

Carleton University’s Centre for Media and Transitional Societies (CMTS), in collaboration with Canada’s International Development Research Centre (IDRC), is pleased to launch a call for concept notes, in French or English, outlining proposed research examining the impact of convergence between traditional radio and new information and communications technologies (ICTs) in sub-Saharan Africa.

For full details on the research competition, the call for concept notes and the submission process, please visit the project website at www.cmts-cmst.org.
Posted by Ore at 12:57 pm No comments:

Moving Forward in the Fight Against Gender Violence 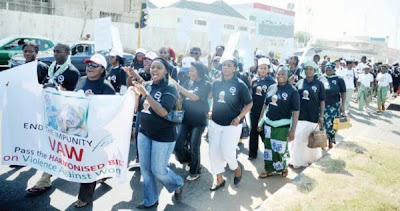 As we wrap-up this year’s 16 Days Campaign against gender violence, it’s important to identify steps to advance this cause.

Last Friday’s march to protest the rape and murder of youth corper Grace Ushang was an excellent step in raising awareness about not only this incident, but all the other thousands of assaults that take place daily and go unreported. Efforts like this also provide a space for women and advocates against gender violence to get together, support each other and propose progressive measures.

At the march and vigil, protestors made the following recommendations:
- To take measures to guarantee the safety and personal security of youth corps members and indeed all women and girls who remain vulnerable due to impunity amongst perpetrators in Nigeria;
- To pass the Bill on Violence Against Women presented to the House of Representatives since April 2002;
- To adopt and pass the Harmonised Bill on Violence Against Persons (Prohibition) Bill 2008 presented to the Senate through its Committee on Judiciary, Human Rights and Legal Matters in July 2008;
- Appropriate funds to facilitate the establishment and equipping of units in all divisional posts of the Nigeria Police Force to enhance the investigation and prosecution of cases of violence against women, thereby enhancing accountability and access to justice for women who suffer abuses in private and public spaces;
- Commit a full scale investigation to bring the killers of Grace Ushang to justice.

The last is crucial, because after the initial outcry, the incidences fade from the public’s memory and justice is either intolerably slow in coming or permanently deferred. Last year’s attack of Uzoma Okere by a naval rating is a perfect case in point. Thankfully though, the court case is still in process, despite delay tactics from the defendants’ lawyers.

It’s important that each of us thinks about how we can help eliminate violence against women. For a start, supporting bills and other legal instruments that seek to provide additional protection to women is a good start. We can participate in events and gatherings like the vigil and march in honour of Grace Ushang and mobilize others to do the same, as our physical presence – especially in large numbers – shows solidarity and makes a greater impact than we imagine. We can individually challenge thinking and cultural mores that permit violence against women through discussion and action.

It’s not always easy, especially within cultural contexts that view these issues of violence benignly or even actively encourage them. We might not all think ourselves capable of ‘putting ourselves out there’ but perhaps you could find small but important actions to take. The struggle to eliminate gender violence requires all our efforts and should not be left to those considered the ‘heavyweights’ of women’s rights. This is a continuous struggle and should not be consigned merely to these 16 days of each year.
Posted by Ore at 12:32 am 1 comment:

Listen to podcasts from lifetsyle and wedding Nigerian photographers on The Nigerian Photographer.
Posted by Ore at 1:24 pm No comments: 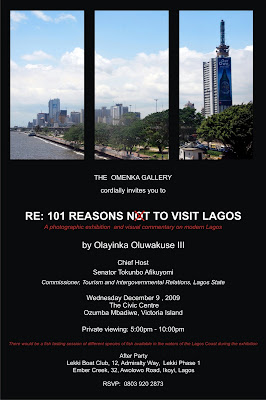 The Ben Enwonwu Foundation cordially invites you to RE: 101 Reasons NOT to Visit Lagos, a photographic exhibition and visual commentary on modern Lagos by Olayinka Oluwakuse III.

The horrendous rape and murder of youth corper Grace Ushang in September shocked and angered the nation. Ms. Ushang was abducted and raped to death by a gang of men in Maiduguri, Borno allegedly because they were offended by her wearing trousers (which happens to be the uniform of youth corpers).

This is another example of violence against women that is so pervasive in our society. Rather than condemning and addressing the violence, the blame is often shifted to the victims. In this case, the Director-General of the National Youth Service Corps urged youth corpers to 'take their personal security seriously.'

In other cases, the victims are accused of dressing in a provocative way that would only naturally attract unwanted male attention. In 2008 the chairperson of the Nigerian Senate's Committee on Women, Senator Ufot Ekaette, introduced a bill in the Senate to prohibit 'indecent dressing'. The bill covers any female above 14 years wearing a dress that exposes 'her breast, lap, stomach and waist ... and any part of her body from two inches below her shoulders downwards to the knee.' The bill would invite the both the police and citizens to pounce on women perceived to be indecently dressed. In a nation where unfair on-the-spot justice is routinely meted out, the opportunities for abuse of this bill are too horrific to imagine.

In honour of the late Grace Ushang, the Nigerian Feminist Forum is organising a march and vigil tomorrow (Dec 4).

Learn more and the Grace Ushang Foundation and read the invitation letter to the vigil below:

In the spirit of solidarity and support for the family of late Grace Ushang -(the Youth Corper raped and killed while properly dressed in her NYSC uniform in Maiduguri, Borno State) the Nigerian Feminist Forum (NFF) is organising a peace vigil and a march to speak up and speak out against violence against women and the indecent dressing bill.

I urge you all to attend this event to show your support for the cause and your belief in the fact that NO INDIVIDUAL HAS THE EXCUSE TO RAPE A WOMAN ON ACCOUNT OF HER DRESSING.

Dress Code: Black
Also come along with a candle stick
Bring family, friends and loved ones

I thank you all and look forward to marching with my sisters and brothers in solidarity.